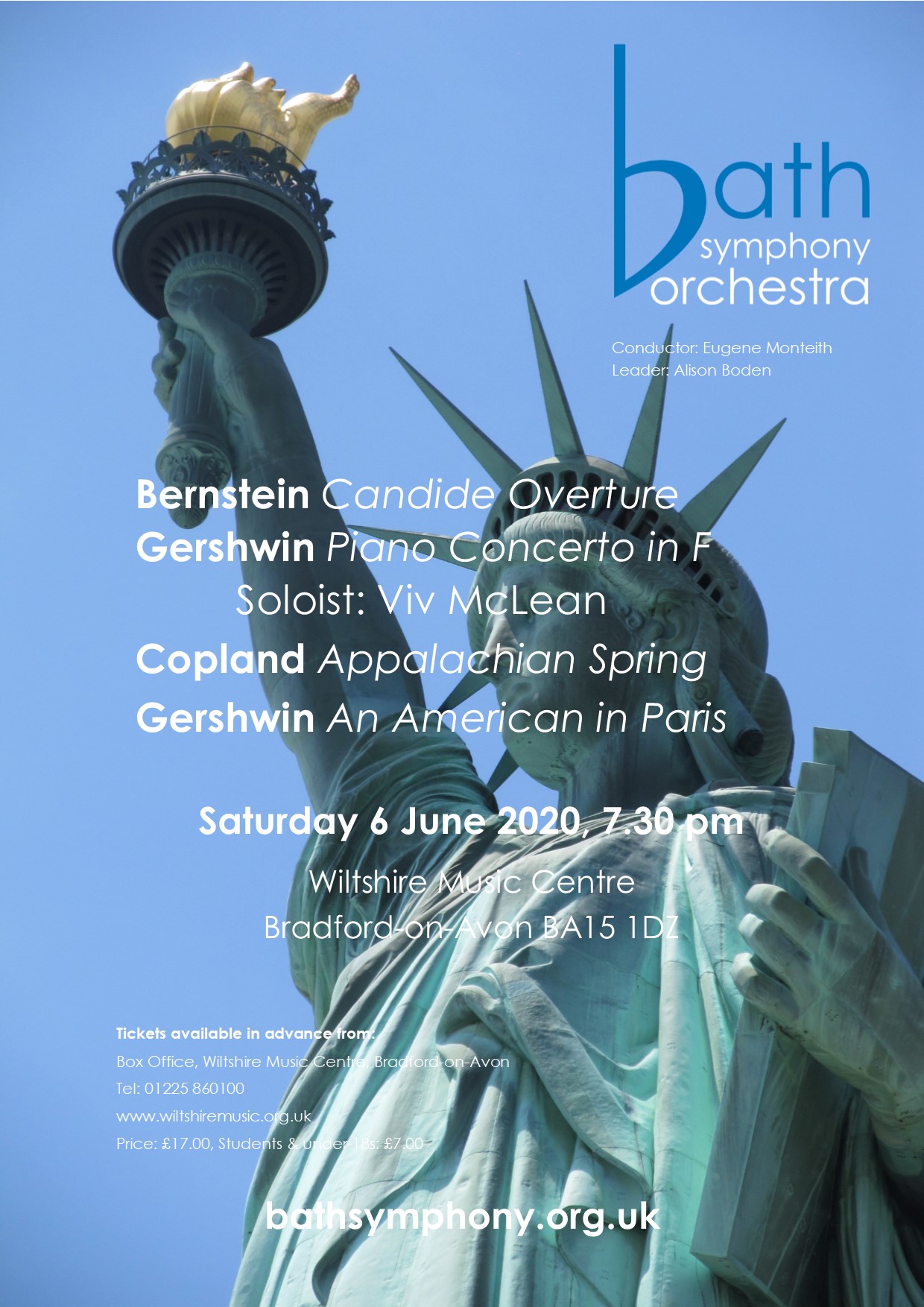 Our summer programme explores the musical connections between 20th century New York and Paris.  Leonard Bernstein felt that Voltaire’s novella Candide, a satire on the hypocrisy of 18th century French society, found parallels in American society of the McCarthy era.  The scintillating overture, brimming with excitement and gorgeous melodies, opens our programme.

Both Copland and Gershwin studied in Paris in the 1920s – in Gershwin’s case, not very successfully, but the light-hearted An American in Paris was the result, conjuring up French atmosphere and street sounds with its trio of saxophones and car horns.  His Piano Concerto is a wonderful synthesis of the classical concerto form with jazz style and incorporates cheeky Charleston rhythms, a smoky Blues trumpet solo and grandiose sweeping melodies. We are delighted to welcome Viv McLean as our soloist for this concerto.

Copland was commissioned by choreographer Martha Graham to write a ballet with ‘an American theme’.  The ever-popular Appalachian Spring depicts a young couple building their farmhouse in Pennsylvania and features the much-loved Shaker tune, Simple Gifts.

Our soloist Viv McLean won First Prize at the 2002 Maria Canals International Piano Competition in Barcelona and has performed in all the major venues in the UK, as well as throughout Europe, Japan, Australia and the USA. He has performed concertos with orchestras such as the Royal Philharmonic Orchestra, Philharmonia Orchestra, London Philharmonic Orchestra, Halle Orchestra, English Chamber Orchestra, BBC Concert Orchestra, National Symphony Orchestra, Sinfonia Viva and the Scottish Concert  Orchestra under the baton of such conductors as Wayne Marshall, Christopher Warren-Green, Owain Arwell Hughes, Carl Davis and Marvin Hamlisch. As a keen chamber musician he has collaborated with many groups including the Leopold String Trio, Ysaye String Quartet, Ensemble 360 and the Sacconi String Quartet as well as artists such as Natalie Clein, Daniel Hope, Guy Johnston and Lawrence Power. Viv has appeared at festivals including the International Beethoven Festival in Bonn, the Festival des Saintes in France, Vinterfestspill i Bergstaden in Norway and the Cheltenham International Festival in the UK, and has recorded for Sony Classical Japan, Naxos, Nimbus and RPO Records. Viv has recorded regularly for BBC Radio 3 as well as for radio in Germany, France, Australia, Norway and Poland.